This mistress was not out to punish this girl the way she had made it seem. All she wanted from him was to have her pussy licked and that is what happened. She pretended to be angry at him so as to get to facesit him. After that, she rubbed her pussy and her clit on his face and she enjoyed it so much that she came. He loved it too.

Mistress Electra and her boyfriend love to bet on things. They had one such bet today which she won and she did not want anything from him other than to facesit on him. She loved how he struggled to breathe but at the same time loved her ass on his face. She could see and feel his dilemma and she wiggled her ass on his face to make it even worse.

These mistresses could not understand how and why their slave was ignoring instructions. They were not going to sit back and let him continue doing things that way. So they did what they do best and they used their big asses to smother him. In no time, he was choking and their sweaty asses were all up in his face and he realized it was easier to obey their instructions.

Goddess Fiona has a gorgeous ass and she knows it. She used it today to facesit on her colleague and take advantage of him. She knew that he had the hots for it and that is what made it easy for her to dominate and humiliate him. The mistress did not have to struggle looking for how to dominate him as she used her facesitting fetish to get it done.

Mistress Nica and her husband always enjoyed a lot of fun trying new things sexually but today she was so pissed at her man that she had to choke him and do so with her hot ass. The mistress used her jeans to facesit him and make him choke in the process. He even shit his pants as she did her thing on him and that was her cue that he had learned his lesson.

Lady Meli facesits guy for fun being an asshole

Lady Meli wanted this guy to stop being an asshole especially to those he considered were below his class. He was so entitled and rude that she could not help but punish him to make him review his life decisions. She facesat on him and choked him as she did so. She also farted on him to make it a little bit worse. And that is how he learned never to look down on people 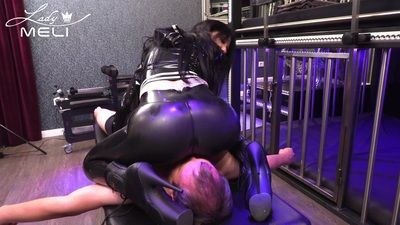 Mistress Kira loves playing video games and her boyfriend did not like it. He tried to make her change but she was not yet ready to change. She had to shut him up as he was distracting her from what she was doing. She was in a fierce battle with a competitor and being a fierce competitor herself, she had to make sure she did not lose. So she facesat on her man to shut him up.

Mistress Sofi facesits on slave for being a nuisance

Mistress Sofi does not like it when anyone messes with her and her slave was being a nuisance to her today and she did not like it. The mistress had to make sure her slave learned his lesson and that he learned it well. So she facesat on him as she watched a movie on her laptop. She choked him in the process but he could not do anything about.

Lady Amy had a husband who did not like to be told anything. He thought he was the one who knew best and that behavior infuriated her. She thought he would change but he did not and she had to punish him to force him to change. Lady Amy did so by facesitting on him with her jeans and crushing his face as cruelly as she could manage to do.